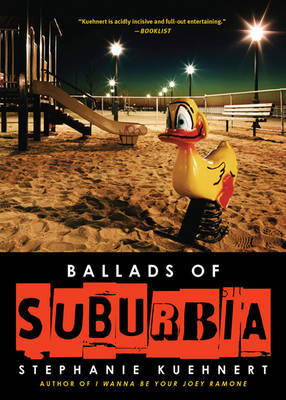 Ballads are the kind of songs that Kara McNaughton likes best. Not the cliched ones where a diva hits her highest note or a rock band tones it down a couple of notches for the ladies, but the true ballads: the punk rocker or the country crooner telling the story of their life in three minutes, the chorus reminding their listeners of the numerous ways to screw things up. In high school, Kara helped maintain the "Stories of Suburbia" notebook, which contained newspaper articles about bizarre and often tragic events from suburbs all over and personal vignettes that Kara dubbed "ballads" written by her friends in Oak Park, a suburb of Chicago. Those "ballads" were heartbreakingly honest tales of the moments when life changes and a kid is forced to grow up too soon. But Kara never wrote her own ballad. Before she could figure out what her song was about, she was leaving town after a series of disastrous events at the end of her junior year. Four years later, Kara returns to face the music, and tells the tale of her first three years of high school with her friends' "ballads" interspersed throughout.

Stephanie Kuehnert got her start writing bad poetry and good punk rock feminist zines, one of which was featured in the book Zine Scene. She received her MFA in creative writing from Columbia College in Chicago. Her short stories have been published in Hair Trigger, f6 magazine, and on inkstains.org. Stephanie's interviews and essays have appeared in No Touching magazine, on Virginia Quarterly Review's website, and on freshyarn.com. This is her second novel.