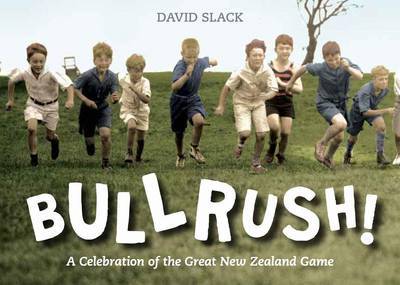 A fun, fact-filled history and tribute to that most iconic of Kiwi childhood games, Bullrush, from its origins and its various bannings to its modern revival in the post-PC playground. Every Kiwi kid played it - or tried to avoid playing it. Either way there was no avoiding it. School playgrounds across the country rang to calls of "bullrush!", followed by a stampede of bare feet, as often as not ending in grazed knees and torn shirts. Arriving on the first immigrant ships from Britain, the game took hold quickly in the new colony. Simple, sometimes brutal, always thrilling, the game was a childhood rite of passage, no adults involved, handed down from generation to generation in the playground. Routinely banned by schools, though never suppressed, it has recently experienced a resurgence of interest and support, with many now recognising its place in the freewheeling, outdoors lifestyle that New Zealanders once held dear - and still do. In this mixture of accessible social history and the anecdotal memories of a wide range of people, David Slack pays tribute to one of the great unofficial institutions of New Zealand culture. Featuring interviews and hilarious anecdotes from a wide range of New Zealanders, including actors, celebrities, comedians, sports presenters, politicians, former All Blacks and other sports people.