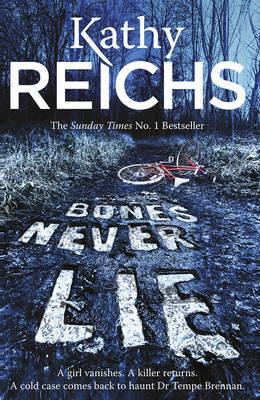 A match has obtained on DNA sample 7426 to Canadian national number 64899, identified as: Anique Pomerleau, White/Female. DOB: 12/10/75. The subject is currently not in custody. For a decade, Temperance Brennan has been haunted by the monster. Anique Pomerleau. Killer of young women. The one who got away. The one who has now come back. Feeding on fear, grief and rage. Killing again. Killing girls. Getting closer. Coming for Tempe.

I have been a fan of Kathy Reichs for about 15 years and I believe I've read every one of her Tempe Brennan books, but this has to be the best. Brennan is called in to consult on a missing child case which has connections to a serial killer from her own past. Another child goes missing and Brennan, with the help of her old partner Andrew Ryan, discovers the possibility the killer has been working up and down the Eastern Seaboard between North Carolina and Montreal for many years, abducting and killing young girls without anyone connecting the deaths. I always enjoy Reichs' style, but she's stepped the suspense and the angst up several notches this time with a killer so inhuman and scary, I didn't want to put the book down until the very end. - Lucy

Kathy Reichs is vice president of the American Academy of Forensic Scientists; a member of the RCMP National Police Services Advisory Council; forensic anthropologist to the province of Quebec; and a professor of forensic anthropology at the University of North Carolina-Charlotte. Her first book, Deja Dead, catapulted her to fame when it became a New York Times bestseller and won the 1997 Ellis award for best first novel. She has written 15 bestselling Temperance Brennan novels, the most recent include Bones Are Forever and Bones of the Lost.