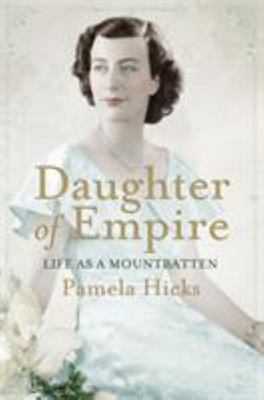 Daughter of Empire: Life as a Mountbatten

Pamela Mountbatten was born at the end of the 1920s into one of Britain's grandest families. The daughter of Lord Louis Mountbatten and his glamorous wife Edwina Ashley, she was brought up by nannies and governesses as she was often parted from her parents as they dutifully carried out their public roles. A solitary child, she learned to occupy her days lost in a book, riding or playing with the family's animals (which included at different times a honey bear, chameleons, a bush baby, two wallabies, a lion, a mongoose and a coati mundi). Her parents' vast social circle included royalty, film stars, senior service officers, politicians and celebrities. Noel Coward invited Pamela to watch him filming; Douglas Fairbanks Jr. dropped in for tea and Churchill would call for 'a word with Dickie'.After the war, Pamela truly came of age in India, while her parents were the Last Viceroy and Vicereine. This introduction to the country would start a life-long love affair with the people and the place.

A magical memoir about childhood in India by the daughter of Lord Louis and Edwina Mountbatten; a glimpse into the lives and loves of some of the 20th century's leading figures.

Unsurprisingly, Pamela became one of the two ladies-in-waiting to accompany the Princess on her 1952 Commonwealth tour. Queen Mary told her: "You must remember that you will be "in-waiting" and so you are to call her "Princess Elizabeth" and "Ma'am" and never Lilibet. It was from that tour that Elizabeth returned as Queen, and Pamela's description of how the Princess learned of the death of her father, King George VI, is very moving. Anne de Courcy, MAIL ON SUNDAY After India she writes as a participant of such well-known set-pieces as the current queen's wedding, her coronation and her first commonwealth tour. These are described with charm, geniality and a sense of humour. David Gilmour, THE SPECTATOR Lady Pamela's portrait of her upbringing by two remarkable parents is affectionate and spirited. Claudia Fitzherbert, THE DAILY TELEGRAPH There are also some touching behind-the-scenes glimpses of the Queen, to whom the writer was lady-in-waiting both before and after her coronation. She writes movingly of their tour of Kenya, when the message came that the king was dead. This devastating news had to be relayed to the new young queen, who received it with quiet dignity. Jad Adams, SUNDAY TELEGRAPH A jolly romp TATLER It's a uniquely intimate glimpse of the Queen few really know. In this captivating memoir, her cousin reveals a playful and surprisingly emotional woman DAILY MAIL A memoir of an aristocratic upbringing and coming of age YOUR FAMILY TREE Lady Pamela Hicks recounts her life as a Mountbatten in this colourful and entertaining memoir. The daughter of heiress Edwina Ashley and Lord Louis Mountbatten, the former Lady in Waiting to our present Queen Elizabeth can trace her roots back to the 9th century and count two saints among her ancestors. Jam-packed with familiar characters from history, this is a wonderful tale of a life less ordinary FAMILY TREE MAGAZINE

The daughter of Lord Louis and Edwina Mountbatten, Lady Pamela Hicks was Lady in Waiting to the Queen both when she was a princess and following her coronation. In the 1960s she married the flamboyant designer David Hicks who became internationally celebrated. This is Lady Pamela Hicks' second book, her first, India Remembered - an illustrated account of the Mountbattens during the Transfer of Power was published in 2007.