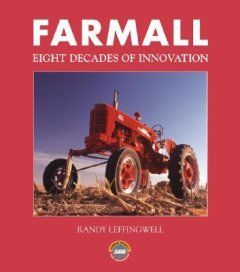 A bestselling author and photographer turns his lens on this iconic American tractor from International Harvester's first 1924 Farmall line to the new compact tractors being produced by Case-NewHolland today. This book comprehensively documents the International Harvester Company's activities from its inception to its merger with Case as Case IH and their influence in Australia and New Zealand. IHC began with a merger of harvesting machinery companies to for the International Trust, the world's biggest farm machinery enterprise at the time. Then IHC became involved with tractors to become the world's largest tractor and full-line machinery maker, setting production records that stand to this day. This book features details on tractors and machinery models; Australian and New Zealand collectors seek in the IH brand line up; information and anecdotes about collectors and enthusiasts; collecting, restoring and maintaining vintage machines; and story of Geelong IH Works. It tells about the legacy handed on to Case IH. Case products are delineated and future projections are suggested. The book is copiously illustrated with much previous unpublished material. ...Show more The Earthmover Encyclopedia by Keith Haddock

This colossal reference book documents the timeless urge to reshape the world, and the machines used to do so from the 1088's to today. From utility tractors and loaders up to the largest diggers and bulldozers, every piece of heavy equipment is listed here by model and manufacturer, making this the mos t exhaustive book on the world's most hard-working vehicles and machines. ...Show more

From Allis-Chalmers to Vickers, here is an A-Z of tractors made in Britain between 1945 and 1965, written by a universally acknowledged expert in the subject, whose work has been widely published in books and magazines. British Tractors deals with the products of not only British manufacturers such as D avid Brown, Ferguson and Nuffield, but also the American makers who established plants in Britain to overcome postwar import restrictions, which included International Harvester, Massey-Harris and Minneapolis-Moline. Demand for tractors after the War was insatiable, and the period covered saw extraordinary growth in production and innovation in design. The text is illustrated exclusively with images - some 400 in all - from the manufacturers' sales brochures and publicity material, giving a unique flavour of the times and an impression of the features the manufacturers were highlighting in the promotion of their tractors. ...Show more A rugged mountainous landscape demands tough truck to do the workaday hauling that keeps New Zealand commerce moving. There is nothing workaday about the trucks that do the job. They have about them a sense of power and purpose that captures the imagination of young and old alike. This book is a j ourney from Kaitaia to Invercargill that, along the way, discovers some of the gest-presented trucks to be found anywhere in the world. ...Show more Tractors features the fascinating histories of todays major tractor manufacturers. It also has a fascinating array of colour and black and white pictures to illustrate the machines these pioneer farmers invented and manufactured. This title features five hundred photographs of Farmall tractors for lovers of this big red machine. It includes information that ranges from the first experimental model introduced in 1924, through the classic line up of International Harvester models that bore the Farmall name, to the last one to roll of the assembly line (the landmark five millionth produced at the Farmall plant in Illinois). Its detailed descriptions combine with vibrant pictures to make Legendary Farmall Tractors a full-scale appreciation of the art of farm machinery at its finest. ...Show more